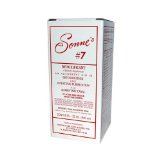 Sonne’s Detoxification No 7. Description: When a volcano erupts, there is often a fine steam or mist released which contains a substance known as volcanic ash. Bentonite is a volcanic ash. As it contains many minerals (24 to 33), it serves to mineralize the soil. Bentonite clay can be mined from veins which are two to three feet wide and deep, but many yards long. Natives on every continent have used volcanic ash for centuries both internally and externally. The value of montmorillonite (the active ingredient in bentonite) lies in its ability to adsorb (not absorb) many times its own weight and volume in an aqueous medium. It has a predominantly negative charge that is capable of attracting many kinds of positively charged particles. Its negative charge enables it to pick up positively charged, toxic material from the alimentary canal to be expelled in the feces. The adsorption is a rapid process and can quickly neutralize allergens before they attach themselves to blood cells, thus preventing allergic reaction. There is no evidence that bentonite has any chemical action on the body. Its power is purely physical. Studies have also found that the montmorillonite in the Detoxificant removes bacteria and thus can help relieve symptoms of diarrhea, abdominal cramps, malaise, headaches and nausea. You Might Also Be Interested In: Detoxify While You Sleep. These Detox Pads help to remove toxins, improve circulation and Combat fatigue. Triple Action Detox stimulates reflexology points and has strong absorption capabilities. Disclaimer: These statements have not been evaluated by the FDA. These products are not intended to diagnose, treat, cure, or prevent any disease.