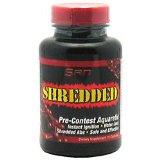 Shredded contains a sequence of compounds that are all designed to rid your body of excess water in 72 hours guaranteed. One of these compounds is called “urtica dioica” (stinging nettle root). Originally investigated for its use in treating prostate disorders it contains what are called “lignans” that directly prevent testosterone from binding to SHBG (sex hormone binding globulin). And when this happens, more of your naturally occurring testosterone will be utilized for what it does best… build muscle and make you strong! Along with its testosterone enhancing properties “Urtica Dioica” has demonstrated to inhibit the aromatase enzyme in fat tissue and therefore liberating fat in a fast and efficacious manner. The second compound in Shredded’s unsurpassed formula is Uva-Ursi (Arbutin). Uva-Ursi is a very exciting compound because it can help bodybuilders in more ways than one. Uva-Ursi (Arbutin) was first used to treat urinary tract infections in women to “flush the kidneys” of infectious microbes. And flush they do… and more than just microbes. Shredded’s high pharmaceutical extract of Uva-Ursi contains more than 30% Arbutin which not only surpasses everything that is currently available, but also accelerates the bodies ability to flush water whenever it is needed most, like right before a contest or photo-shot. The third and forth compounds in Shredded are pharmaceutical grade caffeine and a specially harvested Green Tea Extract (60% EGCG). Very recent medical research demonstrated that the combo of “caffeine and green tea (the one that contains at least 60% EGCG)” is enormously thermogenic, and many miracle fat burners promoted to the general public contain this powerful one-two punch. The “mechanism of action” for caffeine is that it strongly liberates fat storage by stimulating adrenaline receptors, which cause small elevations in body temperature, which “kick in” the thermogenic process. And caffeine is a very, very effective diuretic as well. It stimulat