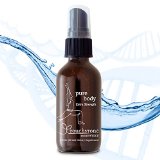 Exposure to toxins starts even before we’re born. From the womb onwards we’re surrounded by chemicals-over 80,000 by most counts-and many of them are toxic over time.

This liquid zeolite reaches to a cellular level and works like mini-magnets to attract and remove positively-charged toxins such as mercury, lead, cadmium, arsenic and more.

Before hydrating the zeolite, the Clinoptilolite undergoes a proprietary multi-step cleansing process, removing pre-existing pollutants from the zeolite, so it actively detoxifies.