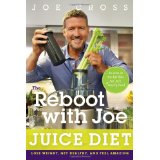 The Reboot with Joe Juice Diet: Lose Weight, Get Healthy and Feel Amazing

Joe Cross was fat, sick, and nearly dead until he harnessed the power of juice to reboot his diet–and his life.

Since his documentary, Fat, Sick & Nearly Dead, was released in 2010 and became a worldwide sensation, Joe Cross has become a tireless advocate for the power of juicing. The Reboot with Joe Juice Diet brings us of the plan that allowed him to overcome obesity, poor health, and bad habits, and presents success stories from others whose lives he’s touched.

Joe–who managed to lose one hundred pounds and discontinue all his medication by following his own plan–walks you through his life before juicing, sharing his self-defeating attitude toward food and fitness, and brings you along on his journey from obesity and disease to fitness, a clean bill of health, and the clarity of physical wellness.

In addition to sharing Joe’s inspirational story, The Reboot with Joe Juice Diet gives readers all the tools they need to embark on their own journey to health and wellness, including inspiration and encouragement, recipes, and diet plans.