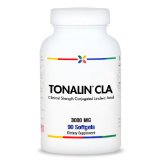 Decades of clinical research indicate that CLA actually changes body composition by reducing body fat and increasing or preserving lean muscle mass, giving you a leaner, healthier appearance. Combined with a balanced diet and exercise, CLA can help you lose body fat, and keep it off. You may drop a clothes size or two without yo-yoing between weight loss and gain. In one clinical research study, a group of overweight men and women were divided into three groups. Two groups received two different forms of CLA and one group received olive oil as a placebo. They were told not to change their diet or activity levels. One year later, those taking CLA had decreased their body fat by 9% and increased muscle mass by 2%. The placebo group showed little or no change in either fat or muscle.

CLA’s potential as a weight-loss aid may be primarily due to its effect on body composition. Those who took CLA over a period of two years did not gain their weight back, a common problem for dieters and probably due to lost muscle mass. Other studies have shown that CLA may help people deal with the irritations and uneasy feelings that occur when calories are restricted – sometimes called the “diet blues.”

Our formula contains 100% Tonalin® CLA, the #1 leading brand of CLA worldwide. Tonalin is a patented form of CLA derived from natural safflower oil, and it is the most extensively researched and clinically proven effective form of CLA in the world. In one recent study, volunteers received Tonalin CLA or a placebo for three months, and asked not to make any changes in their diet and lifestyle. The Tonalin group had a significant reduction in body fat percent from 21.3% to 17.0%, and also had a reduction in body weight.