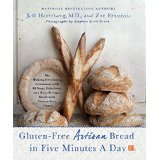 Gluten-Free Artisan Bread in Five Minutes a Day: The Baking Revolution Continues with 90 New, Delicious and Easy Recipes Made with Gluten-Free Flours

The bestselling authors of the groundbreaking Artisan Bread in Five Minutes a Day bring you a new cookbook with 90 delicious, entirely gluten-free bread recipes made from easy-to-find ingredients.

With more than half a million copies of their books in print, Jeff Hertzberg, MD and Zoë François have proven that people want to bake their own bread, so long as they can do it quickly and easily. But what about people with celiac disease or gluten sensitivity? They want to eat well too, but gluten is everywhere: in cakes, pastas, desserts, gravy—even in beer and Scotch whiskey. But the thing they miss most? Bread.

Based on overwhelming requests from their readers, Jeff Hertzberg and Zoë François have returned to their test kitchens to create an entirely gluten-free bread cookbook—most of the recipes that readers loved in Artisan Bread in Five Minutes a Day appear here in a gluten-free version. In just five minutes a day of active preparation time, you can create delectable, gluten-free Sandwich loaves. European Peasant Bread, 100% Whole Grain Loaves, French Baguettes, Crock Pot Bread, Caraway “Rye” Bread, Challah, and even fabulous dessert breads like Brioche, Doughnuts, and Sticky Pecan Caramel Rolls.

Gluten-Free Artisan Bread in Five Minutes a Day extends their revolutionary stored-dough method to yeasted and unleavened breads made without wheat, barley, or rye. With 90 recipes—plus 100 black-and-white instructional photos and 40 gorgeous color images—the authors adopt the rich palette of world breads to their unique method. With this revolutionary approach, you CAN have mouthwatering gluten-free artisan bread in just five minutes a day!